In the lead up to the 2018 Ember Awards, Digital Alberta will be profiling some of the past winners. In this final post before the award show, we highlight the winner of the 2017 category for Best Installation: Rapid Eye Movement.

“We’re a niche company with a specific set of skills,” says Ryan Jorgensen, director of The Rapid Eye Movement, an architectural visualization studio specializing in animation, rendering and interactive displays.

Jorgensen and his partner, Daniel Nobre, got the idea for The Rapid Eye Movement while working at the same architecture firm. They discovered a shared interest in taking architectural visualizations to the next level.

Property developers have long used drawings and renderings to demonstrate their design vision to potential buyers. But Jorgensen and Nobre saw an opportunity to create something more immersive. They wanted to play, not just with animations, but also with augmented and virtual reality, to help customers and future property buyers fully realize the potential of the site being constructed.

“We saw a space,” says Jorgensen. “In Calgary, there aren’t a lot of teams doing this work, even in Alberta as a whole.”

The Rapid Eye Movement launched in 2016 and quickly began to attract attention, not just in western Canada, but internationally.

“We concentrate on very detailed animations and interactive displays. We mainly work with larger-scale projects — like high-rise buildings, condominiums, or community developments.”

In 2017, The Rapid Eye Movement won an Ember Award for Best Installation for its work with the University District community development project in Calgary.

“West Campus Development Trust initially contacted us when their work on the University District was ramping up, and they knew they would need a large showroom within the community to do their public engagement. They just weren’t sure how the showcase would look, so they originally hired us to research interactive display options.”

The Rapid Eye Movement team visited showcases and community centres in other cities, to see what they were doing that was novel and attracting attention. Based on their suggestions, the developers subsequently put out a request for proposals to build the showroom. Jorgensen and Nobre decided to throw their hats in the ring, and they were picked to lead the project.

“We’d never done a showcase of this size before.”

Working with an app development group based out of Toronto, and a model builder based in Calgary, they built a hybrid architectural model and interactive media wall that interact with each other, and are controlled through an iPad. Visitors can choose a specific site within the proposed community, or a specific function (such as site amenities and connectivity). The locations specific to their query light up in the 3D model, while a CG animation plays on the wall. 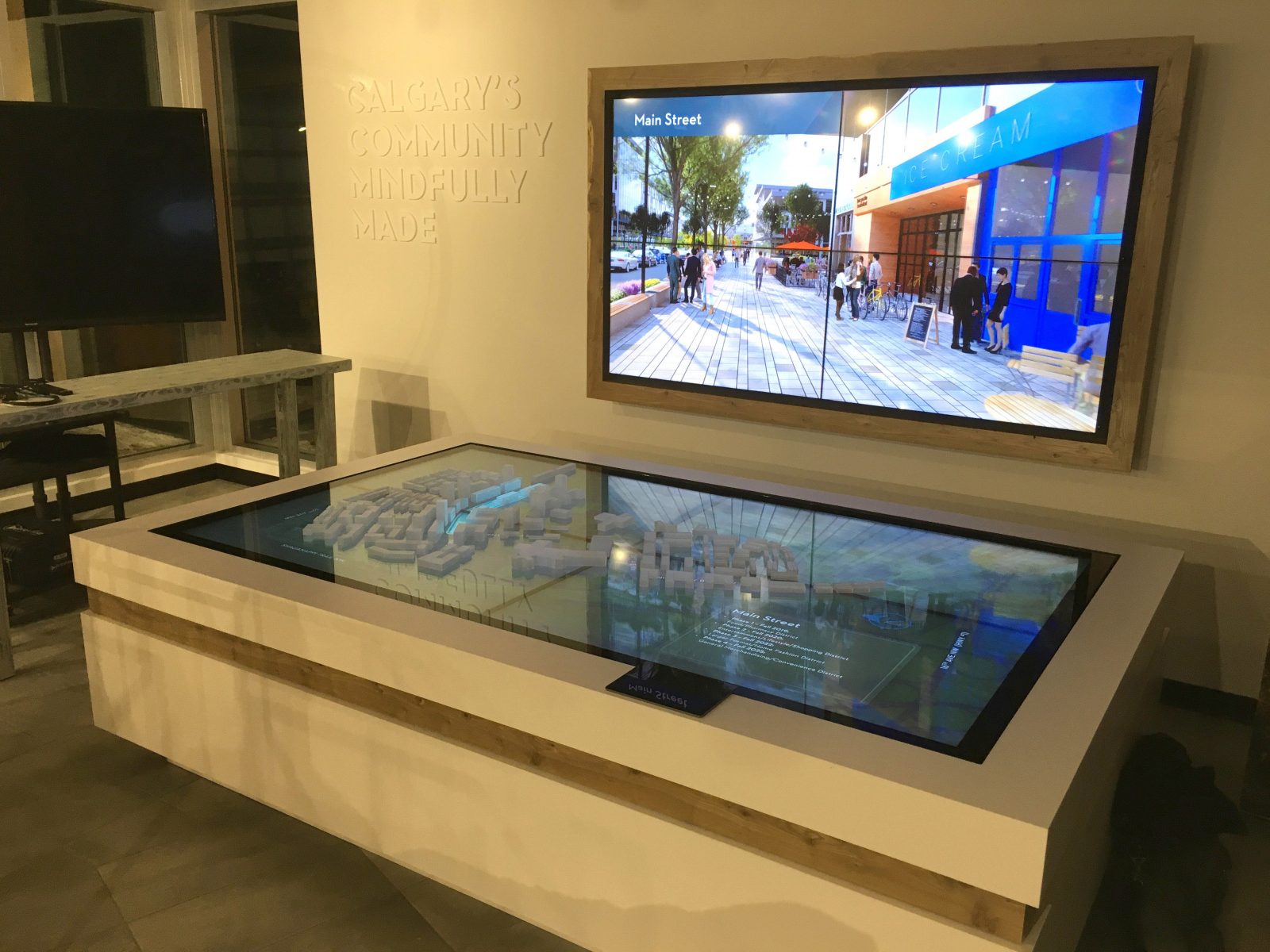 The display is designed to adapt as the development evolves: updated 3D-printed buildings can be added into the model, and new CG animations created.

Jorgensen says his team found the hardware aspect of this project to be the most challenging. “We had to combine eight massive screens, and have them work in unison. So we created a test area in our office (which took up a third of our space) to play with the screens, and make sure the translucent models would work. The final result requires two different computers, a server, controllers, backup, remote cameras… there’s a lot to it!

“But we really enjoyed the physical aspect of this job. We’d done so much digital work up until then, it was nice to go back to the drawing board and get our hands dirty.” 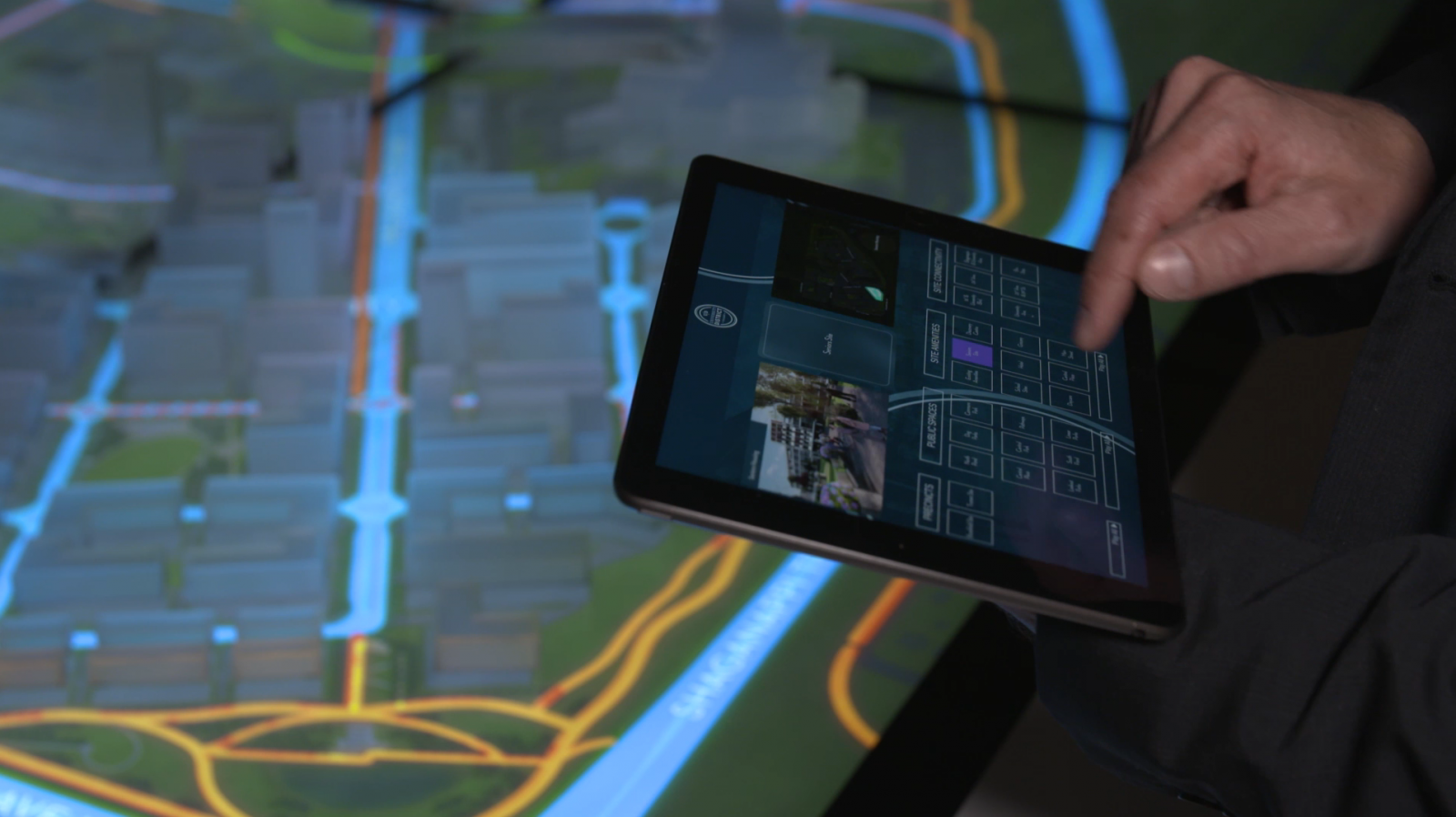 His proudest moment was when the interactive display was unveiled at the grand opening, and he got to watch people playing with it.

“The display was built to highlight specific areas or pieces of information that people were interested in. So they could see the location on the scale map, and see what it will look like on the media wall. The ability to give people that “aha” moment was very satisfying.”

The University District display is still up today, and Jorgensen and his team are currently working on the next upgrade. The developers hope to keep using this display for the full seven years of the community project, “so we knew when we started it had to stand the test of time.”

As for their Ember Award, Jorgensen and his team are very proud of receiving this community acknowledgement. “We were also nominated for an international architectural 3D award for the same project, but there’s something special about being recognized by your local peers.”