“Challenging” continues to be an apt description of the current economic / social / physical / emotional conditions Albertans are facing. But thankfully, there have recently been some glimmers of hope for our digital sectors. These include new funding and investment opportunities from the federal and provincial governments, and the City of Calgary. There has also been a general growing interest from the provincial government in fostering Alberta’s technological industries.

The results from Digital Alberta’s member survey have also demonstrated that some organizations in our community are not only unaffected by the current pandemic, but are actually thriving. 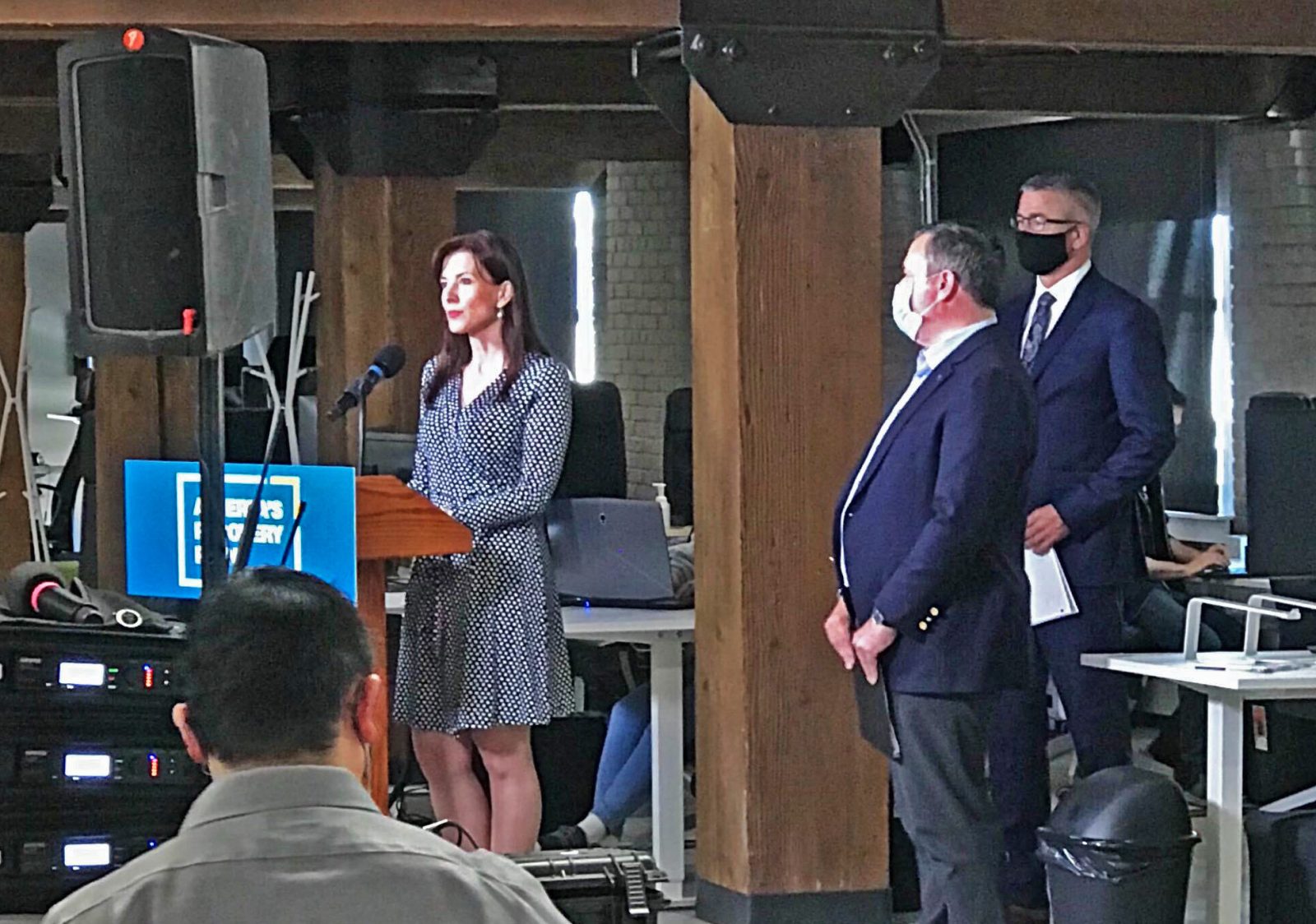 On July 22, the Government of Alberta announced a new Innovation Employment Grant, which will take effect January 2021. Qualifying small-to-medium sized companies can receive a grant of up to 20% toward their R&D expenditures. Its goal is to support businesses during their early stages of development, when they may not yet be profitable.

Specifically, the grant will provide an 8% payment towards a corporation’s R&D spending in a given year, up to its base level of spending, and deliver a 20% payment towards any R&D spending that exceeds its base spending level. Eligible expenditures will be the same as those that qualify for the federal Scientific Research and Experimental Development Tax Incentive Program.

My colleagues and I at Improbable were excited to host the provincial announcement of this grant, where I had the opportunity to speak to Economic Development, Trade and Tourism Minister Tanya Fir, and Deputy Minister Kate White, about the work Digital Alberta is doing. I expect to have a more in-depth conversation with the deputy minister in the near future about the needs of our industry.

On the federal front, we are also pleased to see that eligibility for the CMF COVID-19 Emergency Support Fund was recently expanded. Lending our voice to those from other provinces, as an industry, Digital Alberta advocated quite strongly for this to help fill gaps that Phase 1 did not address. More details on how this new Phase 2 funding will be allocated and disbursed are expected to be announced soon.

The Government of Alberta also recently released the much anticipated report from the Innovation Capital Working Group. Made up of industry, finance, and academia representatives, the group was established by the provincial government in December 2019 with the mandate to recommend policies that will attract investment into Alberta’s startup and early-stage tech sectors.

Credit where credit is due, the working group was honest, writing: “With the elimination of several tax credit programs in the 2019 provincial budget, we now have the least competitive environment for technology start-ups in Canada.”

To improve this, and help Alberta reach a target of 2,000 core technology companies by 2030, the group provided a number of ambitious recommendations, covering three categories: Vision, Capital and Talent.

To improve the reputation of Alberta as a tech destination, the group suggested establishing an advisory committee for the Premier on technology and innovation, as well as developing a new brand and a strong, single voice for Alberta as an ideal location for new tech entrepreneurs. Digital Alberta will play a role here, empowering our industry voice to collaborate with the Premier and provincial government.

Harvest Builders will receive up to $4 million over three years to help create and sustain infrastructure that will allow local startups to test new technologies and grow their businesses, particularly in the fintech and proptech sectors.

AltaML Inc. will receive up to $3.25 million to create a new data science internship program that will accelerate AI/ML skill development through hands-on, mentored work experience. Partnering with ATB Financial and Spartan Controls, the program will open its first three-month cohort to 240 participants in October.

Hearing from our members

A couple weeks ago, we shared the results of Digital Albera’s recent member survey. Based on your feedback, we are doubling down on our efforts to be a meaningful resource to our community. And I was gratified to see that the work we have begun doing — advocating on your behalf to government, and sharing local success stories — are in line with what our community would like to see us doing.

I was also interested to see the impact of COVID-19 on our community. According to our survey, 50% have seen their revenue go down since the coronavirus began. But 19% said their revenue has gone up. Further, 15% said they have actually increased employment. This demonstrates not only the diverse range of industries that we represent (from customer-facing companies to digital services), but also the old adage that there is opportunity in every crisis.

I invite you to read our full summary of the survey, and take us up on the offer to share your story with us.

As always, if you want to get more involved with Digital Alberta and our initiatives, please drop us a note at info@digitalalberta.com.